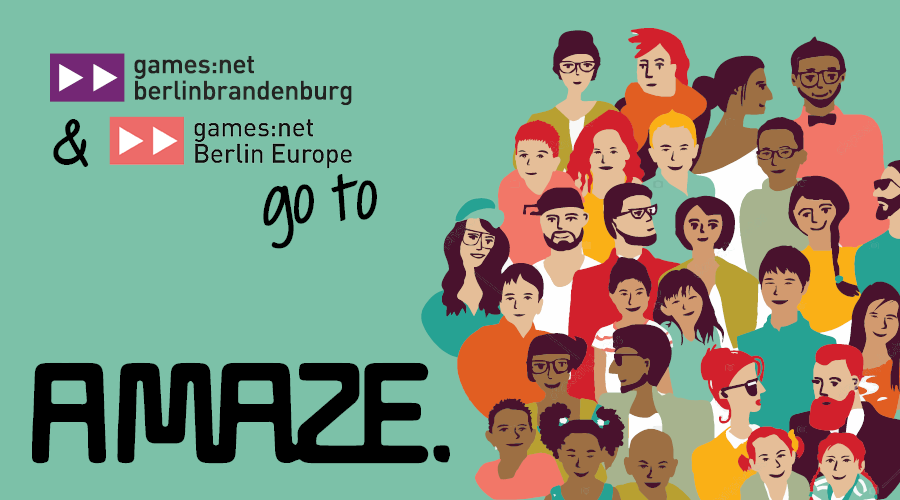 A MAZE. is an international arthouse label in the field of games and playful media that includes independent and alternative game projects, virtual realities and other digital and playful dimensions.

Under the slogan “Hyper Hybrid”, the international festival A MAZE. / Berlin took place on- and offline on different platforms and locations in the capital from July 21st to July 24th. During the festival that celebrated its 10th anniversary this year, new games were presented on open screens, workshops on topics like federal funding and complex storytelling were held and issues like the connection of games and art or indigenous culture in games were discussed. To round it all up, the audience was able to enjoy music streams, live cooking shows or an interactive speed painting performance.

Within this creative web of performances and panels, games:net berlinbrandenburg and games:net Berlin Europe also presented a workshop on “Guerrilla Marketing and how to use Social Media to your Advantage”. Expert Boyan Bonev, owner of a small digital marketing agency focused on content marketing in Nuremberg, Germany, shared his experiences of the viral marketing of the game “Can’t Drive This” (Pixel Maniacs) and consequently, explained social media marketing strategies and the reason why it is perfect for small and medium-sized companies.

After clarifying the term Guerilla Marketing, Bonev talked about inexpensive and effective ways to make a game popular on Social Media. At the end, he developed a sample Guerilla Marketing Campaign together with the participants in just one hour in order to show that it is not as hard as it may sound.

The 2-hour-workshop was held via Zoom and was met with a great deal of interest.