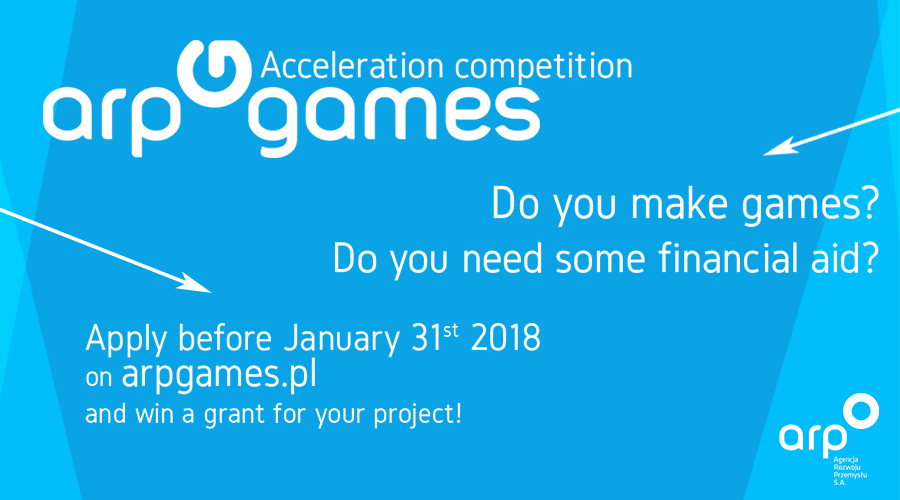 The competition is aimed at talented game designers that need a hand in spreadinng their wings. A team of at least two can submit a project for any platform and on any stage of development. Then, it will be evaluated by an independent jury composed of video game industry veterans. The best ones will enter the first stage of the competition, during which throughout three months, with a help of an experienced mentor, they will work on a playable prototype. ARP Games will provide them with up to 20 000 PLN of financial aid, acess to company’s hardware and software, office spaces and personalized workshops.

After three months judges chose up to three best teams that made the biggest progres. The finalists will start companies and receive a grant of 50 000 PLN for future development of the game. ARP Games will also aid them in promotion and marketing, as well as finding publishers and acquiring secondary investors.

„We take our finalists to the most important industry conferences, where they present their games, gaining valuable experience” – points out Remigiusz Kopoczek, ARP Games’ CEO. „Participating in the competition allows them to spread their wings under the supervision of the best in their field.”

So far, ARP Games ran two editions of their competition. During the first edition they chose to continue working on such projects as Hexiles (strategy mixed with a collectible card game with mythological inspirations), Weakless (artistic game about two travelers: a blind one and a deaf one, that work together to overcome various obstacles) and What If? (an adventure game in which the player makes choices that lead to multiple endings). The results of the second edition will be announced in January.